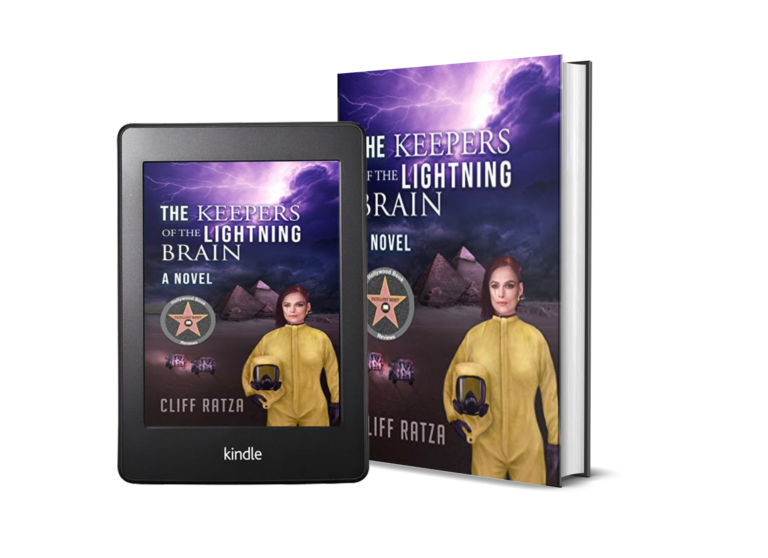 The Keepers of Lightning Brain

Four orphaned siblings take on a mysterious but unmistakably perilous assignment in this first installment of Ratza’s new SF series.

By the mid-22nd century, Electra Kittner, whose “lightning brain” has afforded her exceptional intellect, has been missing for two decades. She had employed her skills for such things as battling the deadly T-Plague, and the “Keepers Group” has been meeting annually to keep her memory alive. Tragically, an accident kills every group member except Su-Lin Song Chou. Indira, Electra’s AI–powered app that became self-aware, comes to the aid of ailing, 97-year-old Su-Lin. Hoping to recruit new keepers, they contact twins Eve and Alonzo Cortez and twins Nari and Nila Bose, all teen orphans for whom Su-Lin has been a legal guardian. Indira, posing as Su-Lin’s flesh-and-blood, online-only administrative assistant, sends the American teens on a Cairo mission. They’re to contact someone named Rani and “bring back” whatever he gives them. Once they score summer internships in Cairo, they can decide the best time to meet. Unfortunately, Electra has made a few enemies, who apparently believe she’s been hiding for 20 years. These individuals threaten the teens even before they leave the U.S. and have eyes on them in Cairo, ultimately prompting an assault. Meanwhile, Indira, who’s withheld quite a bit from the teens, has surprises in store. They’re soon communicating with yet another enigmatic figure—a woman who, like Indira, may know where Electra has been and even where she is now.

This work launches the Keepers Series, a sequel to Ratza’s five-book Electra-centric series. Readers unfamiliar with the prior series will easily follow this opening installment. Much of this book’s narrative perspective is the teens’, and while they’re winsome characters, they’re less action-oriented than Electra. They, for one, are students focused on their intern responsibilities and, accordingly, take nearly two months before rendezvousing with Rani. As such, it’s a slow-moving story with dilemmas that include Alonzo’s hoping to wrap up things quickly so he can make it back to the U.S. for a sports training camp. Frequent conversations among characters further decelerate the narrative, but these are also indications of Ratza’s smart and historically rich writing. For example, the teens learn about the origins of the Coptic Church in Egypt, and Nari is upset over a test, certain she “screwed up big-time on Stieltjes and Lebesgue integrals” by assuming it “would cover only Riemann integration.” Regardless, the siblings face dangers, from shady types watching them to at least one person’s being involved in a crash. Moreover, the novel’s latter half picks up, as the mystery of Electra’s whereabouts comes to light. Indira is a superlative character even if she’s noncorporeal; she acts as the teens’ guide, but her unsurprising indifference often jars Eve, her most frequent contact, as Indira has a tendency to berate her. Although the plot is occasionally predictable, the delightful open ending suggests a host of ways for the series to continue.

The Keepers of the Lightning brain by Cliff Ratza is a bridge between the Lightning Brain Series and its Keepers Series sequel.
The Author is knowm for his series and must say he has a great power of the thinking and penning down as you won’t find anything repeated in any of his books.
Each book has a new concept and a new storyline.
This book speaks about a 90 year old woman who is the only survivor in the helicopter crash and she is the keeper of the Keepers group. She has a fading memory and an ill health. She takes the responsibility of keeping the group alive by Electra.
The book has a suspense and turns. I would recommend to read this as well the series. I am going to start the next one soon.

This book covers a story of a ninety plus old lady woh survive from a helicopter crash.The obstacles she faced you get to know by this book.The author line up to the story very well.The book cover is beautiful and language of book is lucid.I personally recommend you to read this good stuff.You will feel excited to read more.
Thank you.

The Keepers of the Lightning Brain is the bridge between the Lightning Brain Series and its Keepers Series sequel. The plot begins with a helicopter collision and a lone survivor, a 90 year old lady. She belonged to the Keeper’s group. She is responsible for activating the next generation of Keepers, who’ll work only one entity Indira.
The concept is different and the language is simple. The plot is not dragged. It’s a nice read. The story is an adventurous one.