Although an intricate foundation is not necessary for readers to enjoy a fiction series, having one might extend the breadth and depth of their enjoyment. Literary series rather than those written for mainstream categories are more apt to have one, and if a contemporary series does, it might increase the amount of preparatory time and effort before the reader can “dive into” the first novel. Because contemporary lifestyles place deadlines and constraints, only the highly motivated reader might be willing to put up with this rigamarole.

Not so for the Lightning Brain Series! Its foundation is every bit as sophisticated as those found in the best literary series, but readers will discover as much of it as they want simply by reading the books at whatever depth they wish:

What follows is a comprehensive description of our Lightning Brain Series foundation. Please read as much as you wish, and come back for more if it suits you. After all, only you can decide what best meets your needs.

Our series is supported by integrated factual theories and findings that go well beyond those found in other speculative, sci-fi, or dystopian novels. Here are bullet points summarizing the most salient:

Before philosophy, humans had only myth and superstition to explain the world they inhabited. Greece, the cradle of Western philosophy, reached a zenith during the Golden Age (Democritus, Socrates, Plato, Aristotle, etc.) All branches emerged (Metaphysics, Ontology, Epistemology, Ethics, Esthetics, Politics), accompanied by a remarkably accurate description of reality (“Atoms and the Void,” Idealism, Materialism, Values, Relativism). Who knows what greater heights they might have reached had they possessed a better technology?

Greece gave way to Rome, which accommodated Christianity. Exemplar philosophers Saint Augustine and Boethius attempted to integrate Christianity into Greco-Roman Philosophy. What little progress was being made halted when Rome fell. 0 CE to 500 CE is labeled the Dark Ages.

Illiteracy hindered philosophical extension. The rise of Islam (Muhammad) and a handful of thinkers (Averroes, Saint Thomas Aquinas, Maimonides, Machiavelli, Spinoza) continued integrating religion into philosophy while balancing “faith versus reason” and locating the individual’s place in a world they were just beginning to understand.

Philosophy regained its footing when civilization recovered enough from plagues, popes, and monarchs to consider better ways of living. Aided by the printing press and thinkers like Leonardo da Vinci, Martin Luther, Descartes and Hobbes, philosophers used the classical philosophers to pivot away from religion and authoritarian rule to the individual and the facts found via science (Roger and Francis Bacon, Copernicus). They began to consider the secular rather than spiritual.

Now that philosophy had reawakened, thinkers like Newton, Locke, Mill, Smith, Voltaire, Darwin, and Montesque opened new vistas to philosophers, who accelerated Renaissance trends. Led by Immanuel Kant, Hegel, and Schopenhauer, philosophy adjusted the places that Faith/Religion and Reason/Rationality fit, as well as the roles of theoretical versus empirical knowledge.  It also began to consider the psychological dimension.

Philosophers of this period believed in progress, freedom, absolutes, truth, liberty over democracy, the individual over the group, rational thinking over faith, and the perfectibility of man.

Technology and its impact on great European thinkers powered dramatic changes in business, economics, and social order, French and American revolutions and British Imperialism being the most obvious manifestations. German thinkers and philosophers – Hegel, Husserl, Heidegger, Rousseau, Nietzche, Marx, Freud – took the lead, criticizing the dehumanizing aspects of Capitalism and Technology, exploring “a Turn to the Subject” versus Objectivity, and considering Truth, Reality and Values to be contingent on context.

After viewing the disastrous results caused by applying Modern Philosophy, many philosophers abandoned the optimistic Enlightenment principles – Absolutes, Socioeconomic Progress, Objectivity, Liberty, Individualism, Rationalism, Science – and stated new ones that make the “Human Condition” fragmented, uncertain, and meaningless – Negativism, Nihilism, and valueless Existentialism. Everything becomes relative as each person defines Reality, Being, and Truth. All this, when added to Power, Inequality, and Identity conflict became centerpieces for philosophers like Sarte, Foucault, Derrida, Lyotard, Kuhn, and Rorty. But they offered no way out of their dystopian funk.

Contrary to what postmodern philosophers were preaching, the world didn’t end. Philosophers who believed Enlightenment principles could be salvaged regrouped to rein in their exuberant excesses and adjust them for man’s limits. Chief among them are Noam Chomsky and Richard Rorty, who address the problems of Linguistics, and Leo Strauss, who combines the best of Ancient and Modern philosophies to forge a neoconservative economic and political order meant to be satisficing, not optimizing.

And that’s where philosophy is today. I can think of a better name for it: Neuro-Syn Philosophy, but we’ll leave the name game to the next generation. America in the early 21th century has used it to be the most resilient nation for rebounding from “the Great Recession,” domestic inequality and technological threats, climate or sustainability issues, and challenges to its “Superpower status.” America’s future is contingently optimistic. It remains the best place to be.

So, where does that leave Americans? Still pragmatic and looking ahead, but often skeptical of government, business, and academic institutions, often questioning so-called “subject matter experts.” Still demanding freedom and liberty supported by a democratic-style government that promotes diversity and reduces inequality. Still interested in getting ahead while helping others. Still guardedly trusting technology but concerned about its darker side. America and its people remain an exciting work in progress.

Takeaways for Religion and Science

Humanity dropped myth and superstition by morphing them into the security of religion and faith, but progress made in last millennium has weakened the Church. Spirituality decreases; Secularism and Humanism increase as Science and Technology shrink the radius of Religion. A healthy debate between the “two cultures” continues. Both sides finally agree that it is a fool’s errand to debate the “Big Three” questions: Is there a God? How did Life and the Universe begin? Is there Purpose? Though many in Europe have “moved beyond” religion, America is the most religious of First World nations, and the Middle East, where Islamism and Theocracy dominate, continue a millennium-long war against Christianity.

Progress in science and technology have pushed civilization forward, providing tools that give man better insight into the laws of Nature. Enlightenment and early 20th century thinkers believed man would ultimately unravel all of Nature’s mysteries.

That belief has been scaled back. Even mathematics, the bedrock of science, has built-in inconsistencies. Today, the best Man can do is acknowledge its asymptotic limits to what can be known. Advances in bio and computer technology will empower people to grapple with larger problems involving harder equations and more complexity, but won’t bust through boundaries built by DNA.

So, how is America coping? We are promoting religious freedom, diversity, and respect for the individual. We realize that although some areas of science and technology – high energy physics in particular – are close to an asymptotic limit, others – notably genetic engineering and AI computing – are still young and offer significant progress. We have many reasons to be optimistic if we act intelligently.

Implications for Economics and Politics

The Enlightenment unleashed the power of Free Enterprise, Capitalism, and price-driven Market Economies. Their confluence led to demonstrably stunning improvements in overall quality of life. However, their excesses lead to winners and losers.

The Enlightenment also created a better form of government: a democratic Republic answering to the will of the people instead of popes or monarchs.  But economics and politics are inextricably linked, negating the possibility of an “End of History.” There is no final destination of a democratic, capitalistic, and market-driven economy in which people are free and equal.

Today, though the Soviet Union struggles to regain a place on the world stage, there is a challenging alternative to America’s politico-economic model: China. Can its directed economy actually control economic growth? Can its authoritarian government manage resources better than America’s democratic system of checks and balances?

So, how is America responding? By promoting policies meant to broaden business objectives, include all stakeholders, narrow inequality, and reduce partisan politics. By voting into office public servants who practice civility and cooperation, and by fostering a spirit of global cooperation that will prove once again that the American system, though not perfect, is the “last best hope” as long as America stays proactive, resilient, and smart.

Whither the Lightning Brain Series?

Built on this foundation, our series gives readers a refreshingly new set of novels. It goes well beyond the sci-fi, speculative, or dystopian fiction being written today, and it lifts characters and plots found in current literary novels out of their angst-riddled problems found in the “human condition” and puts them in a better place. Unlike many current novels, each book in the series puts no extraordinary demands on the reader’s perseverance. All should enjoy their clarity, style and pace.

So, what’s in store for readers? A profound and enchanting near-term future explored though characters and plot that should draw them in from page one of novel number one: The Girl With The Lightning Brain. Does it succeed? Let the readers decide!

THE GIRL WITH THE LIGHTNING BRAIN

“Electra is exceptional. She knows that. And she also knows her extraordinary abilities – the paranormal aftermath of a near-death experience at birth – are secrets that must never be revealed. Her life depends on it.”

So begins chapter one in book one of the ground-breaking “Lightning Brain” action-adventure series that extrapolates the latest science, political intrigue, and contemporary lifestyles while tracing the twists and turns in the life of Electra “Kit” Kittner. 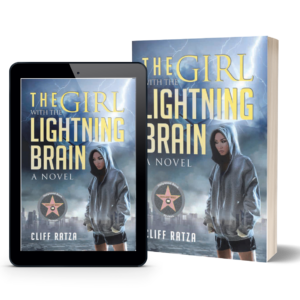 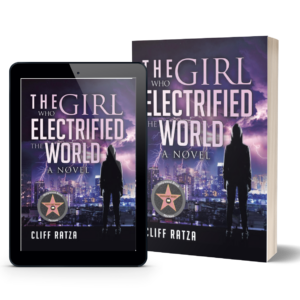 THE GIRL WHO ELECTRIFIED THE WORLD

“Mrs. T struggled mightily to maintain composure… Her head felt like an overinflated balloon… she had struggled even harder to salvage a rescue mission… to retrieve what’s needed to keep America safe from the Techno-Plague, Middle East Terrorism, and the Guardian Party.”

Can Electra keep her “secret” hidden while allowing males to play her deadly games as her array of extraordinary skills deepens? You won’t find out until the last line of the last chapter!

THE GIRL WHO COMMANDED LIGHTNING

Book three picks up where book two’s “Death Vigil” ends. The lightning brain must repair itself before Electra can rejoin the battle against the Techno-Plague as well as contend with war raging in Cyberspace directed by a rogue Middle East state allied with China and Russia, all the while dealing- with America’s relentlessly harsh government.

How the lightning brain and Electra’s emergent personalities struggle to win is a page-turning plot, full of action and suspense to the very end! 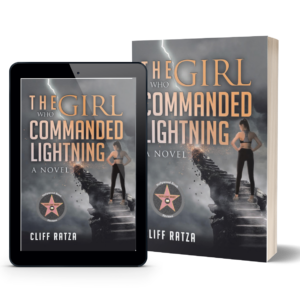 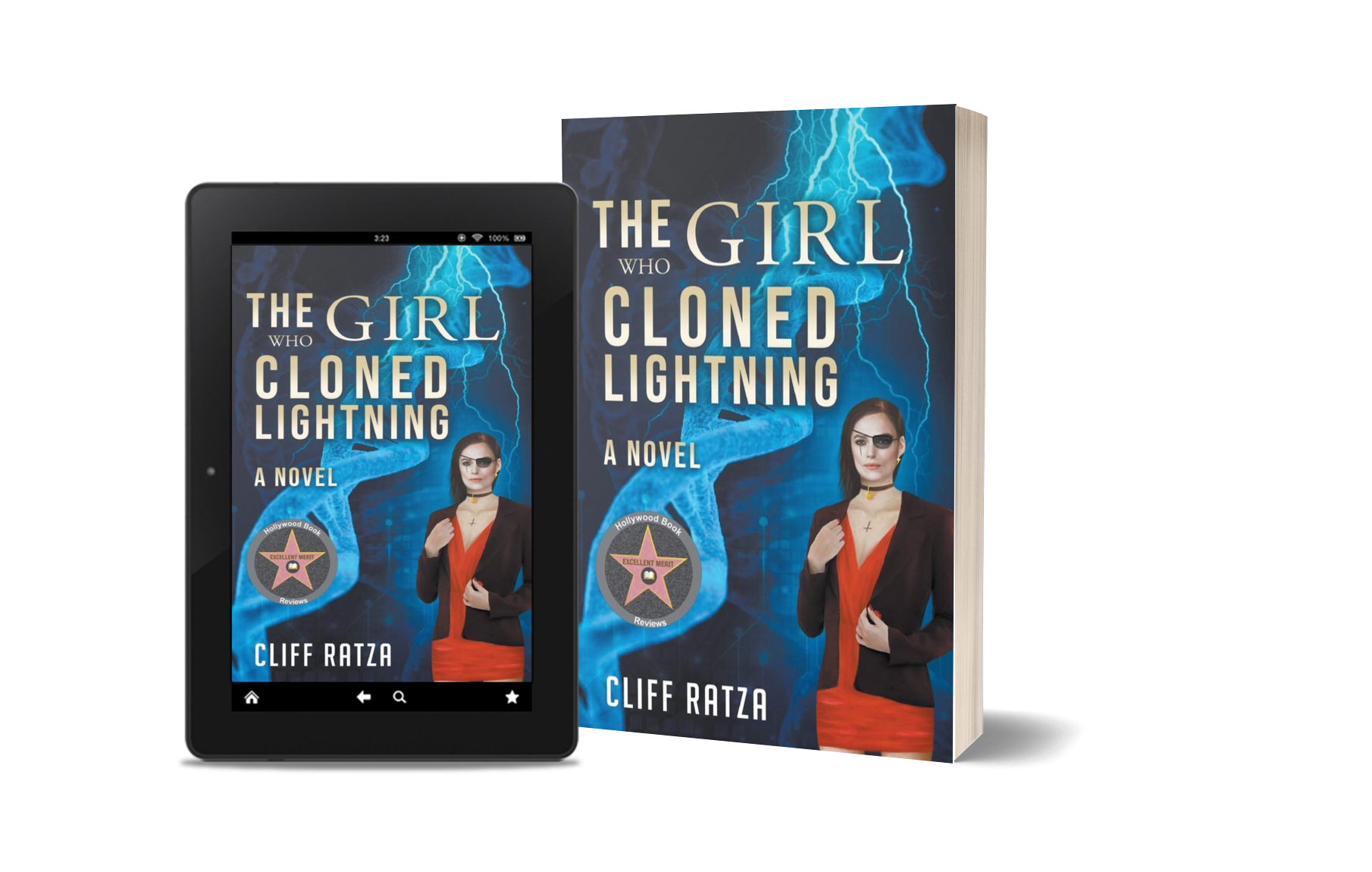 The Girl Who Cloned Lightning

This book charges ahead from Book 3’s explosive ending. Electra Kittner – now an Electra-Alisha split personality infected with an STD-like T-Plague mutation – must cure herself first before battling a new set of enemies in Cyber as well as 3-D Space.

Can she hold adversaries at bay? Find out when you read, and then you’ll know when you reach the very last line of the last chapter.